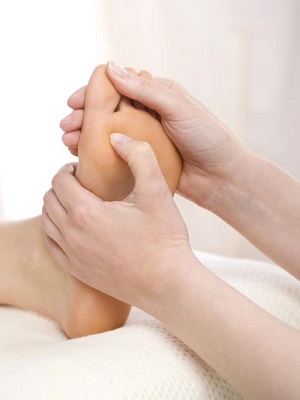 Reflexology is a form of complementary medicine and involves a method of treatment that applies massage to reflex areas found in the feet and the hands. Most commonly, the feet are used as the areas to be treated.

The method has been used for several thousands of years and is known to have been practised in a similar manner by the Chinese and the Egyptians.

Reflexology does not claim to be a 'cure-all' but many people have found they have been helped by reflexology. Surveys carried out by The British Reflexology Association showed benefits to those presenting with symptoms of stress, insomnia and irritable bowel syndrome.

According to Nicola Hall in her book Reflexology for Women, treatment may help with "a wide range of disorders, including headaches, migraines, sinus congestion, stiffness in the neck and back, digestive problems, hormonal problems".

Most people who have experienced a reflexology session would agree that it is a very relaxing therapy, which may reduce tension and lead to an improved sense of well-being.

What to expect from reflexology treatment →